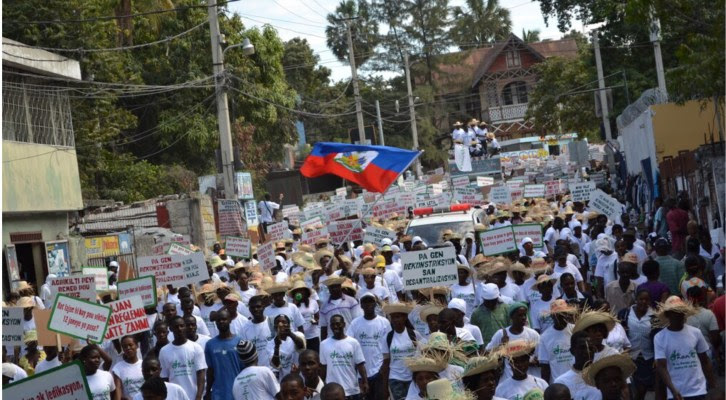 The Art of Haitian Protest

In a democracy,  the right to protest is an important right, and serves as one of the tools used by citizens to keep the authority under control. In Haitian society, protest is the weapon the population uses to fight for change. The sociological and cultural aspects of Haitian protest are remarkable.

The first aspect of protests, especially protests that come from mass movements, is the Vodou ceremony. There is always a Vodou ceremony to ask Papa Bouman strength for the journey. Boukman is the father of popular resistance for many Haitians. Haitian protests also never happen without rara, or without music. Even when the circumstances surrounding the protests are sad there will still be music. The rara or street bands are so essential to demonstrations, they tend to know the protest route as well, if not better, than the organizers and the press. It is important to note that carnival and protests are main sources of income for rara bands. For these bands, protests are a lucrative industry. Protesting as much as one likes and dancing in the streets come at a price.

In other countries, demonstrations usually start with participants gathering at a specified meeting place, and proceeding to march along a planned route. In Haiti, the protest march begins and people join as it progresses along its route. A protest might begin with 50 to 100 people, and the amount of people multiplies once the march has circulated through various neighborhoods. 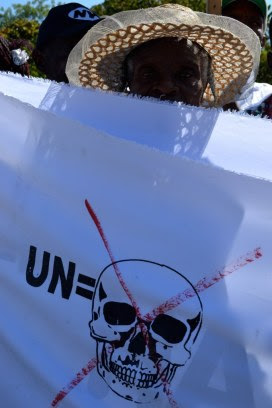 The first type of street protest are religious protests. These are always peaceful, and very successful at blocking traffic. Though it is required by the constitution, church protests do not always notify the police when they will be holding marches, but the police never shut them down or shoot teargas at them. Music is the center of a religious march, the route is filled with singing, and a lot of times the participants are dressed in beautiful uniforms.

2. Demonstrations against a specific revolting event

The second type of demonstration done in Haiti are against a revolting event in the country; something that has happened that Haitian people feel personally attacked by. One example is a recent tragedy in the Dominican Republic where a Haitian man was decapitated and his body was displayed in a public park. Haitians took to the streets to protest this. Two days later, the Dominican president of the time Leonel Fernandez visited Haiti, and the cars that transported him left downtown Port-au-Prince under thrown rocks and bottles.

The third type of demonstration are street protests with political implications, but have a sociological issue as the main catalyst. These types of marches are usually to protest the high cost of living or human rights issues.

Protesting against sociological issues can stem from anything and are often times unpredictable. One clear example is in April 2008, a huge movement against living costs erupted where hundreds of people took to the streets, destroying property they came across along their way because the prices of food and gas had become too expensive. The Haitian police and MINUSTAH could do nothing but stand back and watch the people express their frustrations until they were tired enough to go home. As a result, the government at the time had to change, and prices of essential products had to go down.

There are always risks involved in political protests. Protesters tend to burn tires, block off streets and burn cars. Police officers always shut down these protests with tear gas, hoses and rubber bullets. Protests organized by the political opposition are always successful, no matter what; if the police shuts down a political protest march, it only fuels the opposition’s motivation. If it is not shut down, this allows the march to draw a large crowd and extend their route to places they would have otherwise been stopped from going, which is a psychological victory manifesting to the powers that be that they are also powerful.

As you read this article, you might not be aware of just how often street protests are held in Haiti because they are largely unheard of. Although many people do not value these movements, activists and activist groups take to the streets almost every day to defend human rights and demand change. One such group is MOLEHGAF, which is an anti-occupation movement, holds demonstrations twice a week. Every Wednesday in front of the Ministry of Social Affairs to demand employment, and another day of the week in front of the United States Embassy or in front of the MINUSTAH base to ask that the UN mission end in Haiti. There also many groups of January 2010 earthquake victims living in tents who protest regularly in front of the Ministry of Social Affairs or the Prime Minister’s office to demand appropriate and affordable housing as required under Article 22 of the Haitian Constitution. 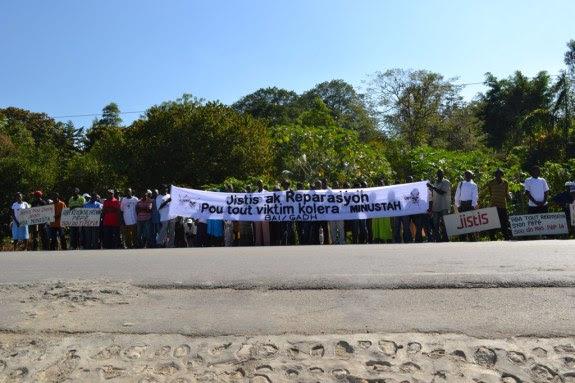 Social and political protests are the most important and several are organized throughout the country every day. From former TELECO employees demanding back pay from the government, to women’s rights groups protesting in front of the Ministry of Women’s Affairs, to Damien University students demanding to be integrated in the ministry, to striking teachers, victims of fraudulent cooperatives, and even electoral candidates whose candidacies have been rejected who have paid people to take to the streets on their behalf. There are so many grassroots and resistance movements currently taking place in Haiti, that if I took the time to list them all, I would never finish.

The vast majority of street protests in Haiti are peaceful, but it is possible for those protests to be infiltrated by a small group of people with ulterior motives whose sole goal is to destroy the protest. If I were to estimate the percentage of protests that end in violence, it would be less than 2%. I am speaking from my experience as a Telesur camera operator assigned with covering protests in Haiti beginning in 2007. Quite often, the police are responsible for the chaos that ensues during a protest, sometimes because they are unprofessional, and at other times because politicians use them as a political tool to destroy the opponent.

Unfortunately, the biased Haitian press focuses on fear mongering and inaccuracies to belittle the causes of certain groups and movements in Haitian society. Haiti has a major issue when it comes to alternative press. Our current local media system is not professional or well organized. When it comes to the international press, Haiti only serves as a source of headlines and sensationalism. If you think about it, there are not even 5 major international media outlets with permanent teams in Haiti; they are only present in Haiti when there are problems. One clear example is during Carnival season.  Even though Haiti has one of the most beautiful Carnival celebrations in the Americas, with vibrant colors and traditions, great music, great food; nobody cared to report about that. But once the unfortunate electrical wire accident happened on the second day of Carnival this past February, all outlets were suddenly interested in reporting on Haiti’s Carnival.

This is why, we usually do not hear about protests unless they involve violence. There are always protests in Haiti; the biggest hurdle is the way the lazy and sensationalist press choose to report on them. The local news organizations, just like the international press do not pay any attention to protests in Haiti unless they end in violence. But we will not be silenced. Just like in every society, we protest to express ourselves; we protest in our own manner.  Sak pa kontan, anbake! Those who are not happy about it, can leave!