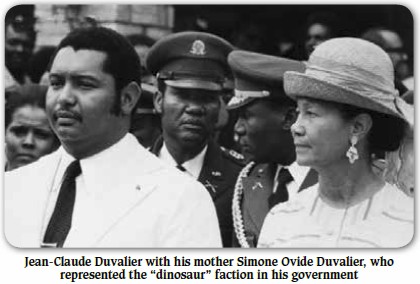 Karl Marx once famously remarked that history repeats itself “the first time as tragedy, the second time as farce.”

This maxim comes to mind when examining the class dynamics surrounding the final days of President Michel Martelly’s regime in Haiti today. They are similar to those of 30 years ago, when the dictatorship of Jean-Claude “Baby Doc” Duvalier was unraveling.

To compare the Haiti of 1986 to that of 2016, one must understand the nation’s underlying class make-up.

After Haiti’s birth in 1804, two ruling classes emerged. The first was a comprador bourgeoisie, whose capital was invested and reproduced in the importation of foreign manufactured goods and the export of Haiti’s agricultural products, chiefly sugar, coffee, and cacao. The other ruling group was the big landowners, or grandons, who owned, leased, or controlled Haiti’s farmland. In a semi-feudal arrangement, sharecroppers, known as dè mwatye (two halves), tithed a large portion of their cash crops to the grandons.

In 1915, U.S. Marines began a two decade military occupation until 1934, during which time they favored, for both racist and economic reasons, the largely (but far from completely) lighter-skinned comprador bourgeoisie.

The reaction to the brutal, bloody, racist U.S. regime was the emergence in 1946 of grandon-leaning President Dumarsais Estimé, whom Gen. Paul Magloire ousted in a 1950 coup on behalf of Haiti’s bourgeoisie. Magloire’s corrupt regime gave rise to the election in 1957 of Dr. François “Papa Doc” Duvalier, who had been Estimé’s Health and Labor Minister and was a champion of the grandons.

To resist the political pressure and counter-attack of the bourgeoisie and Washington (which tolerated but was not comfortable with his regime), Duvalier formed an infamously repressive and arbitrary paramilitary force known as the Volunteers for National Security (VSN), or, informally, the Tonton Macoutes (Uncle Sack). Duvalier’s vicious corps killed tens of thousands of Haitians, often under the banner of “fighting Communism” and its spread from neighboring Cuba.

Papa Doc died in 1971, passing on his title of “President for Life” to his son, Jean-Claude. But Baby Doc had attended elite schools with the children of Haiti’s bourgeoisie, so his regime became something of a hybrid. Half of it was dominated by generals and strongmen from Papa Doc’s clique, known as the “dinosaurs,” while the other half was made up of bourgeois “technocrats,” either friends from school or reformers suggested by Washington. The “technocrats” favored foreign investment and capitalist development, which made more inroads into Haiti after Papa Doc’s death. In 1980, Jean-Claude married a bourgeois princess, Michele Bennett, whose father imported cars and exported coffee.

Under Jean-Claude, Michele Bennett became the symbol of the bourgeoisie’s influence, while his mother and Papa Doc’s widow, Simone Ovide Duvalier, represented the Macoute sector.

Repressive, corrupt, and bipolar, Baby Doc’s regime finally fell in 1986 due to a popular uprising but also a change in U.S. policy to begin replacing its revolution-provoking tin-horn dictators with “technocrats” and pro-neoliberal politicians elected with Washington’s financial backing and political support.

For 20 years, Haiti’s political scene had been dominated by the alternating presidencies of former liberation theologian priest Jean-Bertrand Aristide and his erstwhile ally, enlightened bourgeois agronomist/baker René Préval. Their governments had been undermined, hobbled, and bowed by two U.S.-backed coups d’état in 1991 and 2004, and two ensuing foreign military occupations.

The mass movement which first brought Aristide to power in a 1990 election had a democratic, anti-Duvalierist, anti-imperialist agenda. Martelly’s Washington-assisted rise was the return of a neo-Duvalierist regime, with a “Macoute” wing and a bourgeois wing, and in post-earthquake Haiti, it aimed to snuff out the weakened but persevering popular movement.

The dè mwatye peasant agriculture that once supported the grandons had largely been crushed by the neo-liberal dumping of foreign products – particularly rice – from the U.S. and the neighboring Dominican Republic. The changing grandon class, with its recent Macoute past, increasingly turned to illicit trades like drug-trafficking, kidnapping, land theft, and the black-market for its livelihood and gravitated towards careers in the police and Martelly-resurrected Haitian army, which had been demobilized by Aristide in 1994.

Representing the bourgeoisie under Martelly was his Prime Minister and long-time business partner Laurent Lamothe, who was trained in business at schools in Florida and had become a rich, successful telecommunications magnate.

Representing the Duvalierist wing were Martelly’s wife, Sophia St. Rémy, whose father and brother were drug traffickers, along with the children of many prominent officials from the Duvalierist era like Constantin Mayard-Paul, Claude Raymond, Mme. Max Adolphe, and Adrien Raymond.       Even Baby Doc’s son, Nicolas, had a job in the Martelly government, as did some of Jean-Claude’s former ambassadors like Daniel Supplice and Dr. Pierre Pompée.

Also periodically part of Martelly’s government was the flamboyant pundit Stanley Lucas, the scion of an infamous peasant-massacring Jean Rabel grandon family, who, as an agent of Washington’s International Republican Institute (IRI), had a prominent role in the lead-up to the 2004 coup against President Aristide.

In its composition and program, the Martelly/Lamothe government was a virtual photocopy of Jean-Claude’s regime, using the same economic cornerstones of tourism and sweatshops. It even resurrected the same slogan that the Jean-Claudistes had coined: “Haiti is open for business.”

But just like Baby Doc’s, Martelly’s regime was marked by outrageous excess, infighting, dysfunction, corruption, and repression, leading to a mass rebellion which almost drove it from power in late 2014. To save his presidency, Martelly sacrificed his Prime Minister, Lamothe, who would have been the presumptive presidential candidate of Martelly’s Haitian Bald-Headed Party (PHTK) in 2015. (Constitutionally, Haitian presidents are limited to two non-consecutive terms).

For his PHTK successor, Martelly turned to an unknown provincial businessman, Jovenel “Neg Banann” Moïse, who had developed, with a $6 million government subsidy, a tax-free agro-industry “Agritrans,” exporting bananas mainly to Europe.

With an export-oriented agribusiness built on the dispossession of small peasants, Jovenel Moïse represents what Haitians call the “Macouto-bourgeois” alliance that characterized the regimes of Martelly and Baby Doc.

Many also speculate that the state lands now leased to Agritrans would eventually be turned over to foreign mining interests to continue their now-stalled exploration and environmentally-destructive mining for gold in Haiti’s northern mountains.

The children of Haiti’s comprador bourgeoisie and grandons, as well as other privileged petit-bourgeois strata, usually go to school and college overseas in Europe, the U.S., or Canada. There, they often become doctors, lawyers, engineers, or some other professionals, taking their place in Haiti’s classe moyenne, or middle class.

With the degeneration of the Haitian economy, scores of the classe moyenne have flocked to politics to get a piece of the state, which has become Haiti’s most viable “industry” in recent years. 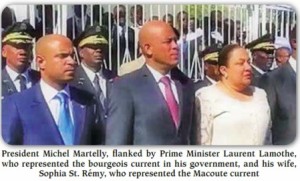 Through the electoral fraud he engineered in the Oct. 25 first round of Haiti’s presidential race, Martelly sought to install Jovenel, who was to go to a second-round with a leading 33% of the vote (although a Brazilian exit poll suggests he placed fourth with just 6% of the vote). That second round, last scheduled for Jan. 24 after two postponements, was suspended indefinitely on Jan. 22, and five of the nine CEP members, including President Opont Pierre-Louis, have resigned.

Although there were 54 presidential candidates, there are only three heavyweights in the opposition to Jovenel and Martelly, and two of them are “Lavalas.”

The third heavyweight is supposed second-place finisher (with 25%) Jude Célestin of the Alternative League for Haitian Progress and Empowerment (LAPEH), which is affiliated (albeit informally) with Préval’s platforms Vérité and Inite, under whose banner Célestin ran in 2010.

Both Washington and Martelly wanted to marginalize the two Lavalas currents and keep them out of any run-off. Although their leaderships adopt moderate positions, their popular bases remain very mobilized and dangerously radical.

Therefore, Washington favors a monolithic two-party system in Haiti (like that in the U.S.), which would establish an alternance between “acceptable” players, parameters of debate, and political programs. The Republican analogue would be the PHTK, while the Democratic surrogate would come from the current Préval constellation: LAPEH, Vérité, or Inite.

Not surprisingly, Lamothe, singer Wyclef Jean, and large sectors of Haiti’s ruling elite have thrown their support behind Célestin, who could be expected to give the U.S. the same grudging but faithful collaboration that Préval did.

Célestin and seven of the other leading presidential runners-up (except the FL) are in a “Group of Eight” (G8), whose unity is more formal than real. While the masses in giant demonstrations demand the elections’ annulment and Martelly’s arrest, the G8 and FL do not. They insist instead on an “independent evaluation commission” to review the Oct. 25 results, each of the heavyweight candidates asserting that they won the election in the first round. Whatever results any evaluation commission finds, it will surely explode the opposition’s tenuous unity.

Meanwhile, the masses continue to vent their anger and frustration at Martelly and the dismal elections he has finally delivered after four years of delay.

Senate and National Assembly President Jocelerme Privert has proposed a complicated transition predicated on the Martelly’s Feb. 7 departure and the new Parliament staying, although many new lawmakers’ elections are also hotly contested. The G8 proposes a transition where fraudulently elected lawmakers would be selectively “ejected.”

The missing element in this revolutionary cocktail, at the present moment, is a vanguard, revolutionary party or front to lead and champion the masses’ increasingly radical demands. Currents like the Dessalines Coordination (KOD), the Democratic Popular Movement (MODEP), and others have been talking but have not yet forged an operational unity.

However, if history is any guide, Haiti’s political crisis and revolutionary potential promises to continue for several months at least. The window after Baby Doc’s fall in 1986 lasted for four years, until the popular movement carried out a political revolution on Dec. 16, 1990 with Aristide’s first election.

Many veterans and students of the struggles of the 1980s and 1990s now realize that a deeper social revolution – changing Haiti’s property relations, above all concerning land – is necessary for any progressive or revolutionary government to survive.

Furthermore, the ruling class is either divided on or unsure of how to go forward and maintain power, offering a unique opportunity for Haiti’s uprising.

All these factors offer hope that the anti-imperialist movement among peasants, workers, and the urban unemployed that began with Duvalier’s ouster 30 years ago can finally make some headway after its many setbacks.